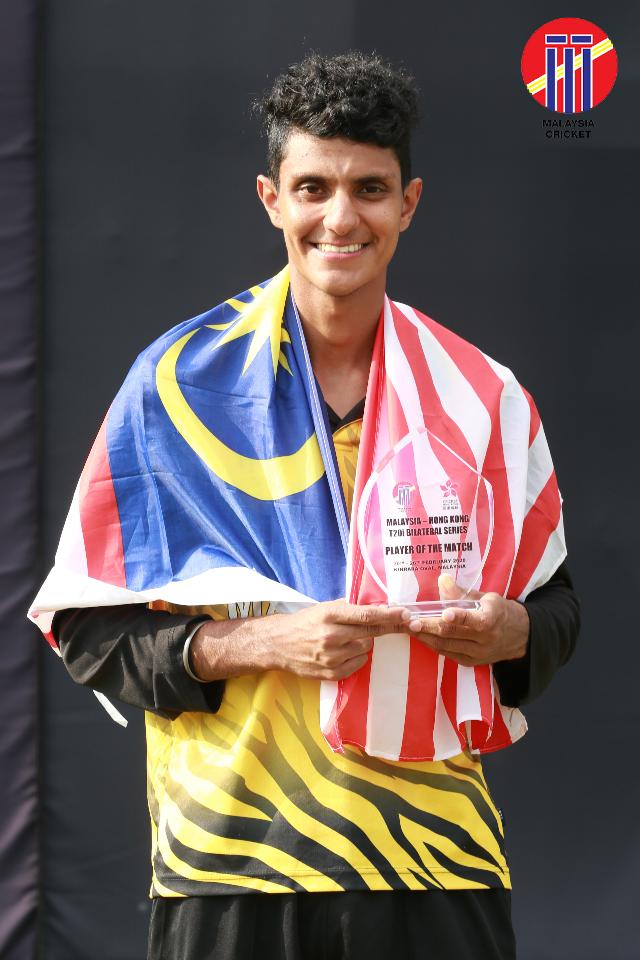 With the confidence flowing, Malaysia made light of playing under the scorching sun to beat Hong Kong by 13 runs to go 4-0 up in the Twenty20 International series at the Kinrara Oval on Monday.

After the previous three games were played in cooler temperatures, it was Hong Kong who wilted in daylight as they were restricted to 154-7 chasing Malaysia's 167-7 with Virandeep Singh hitting his first fifty of the series.

Four Hong Kong batsmen scored in the 20s but the economical bowling of spinners Pavandeep Singh (2-26) and Anwar Rahman (1-39) frustrated the visitors as Virandeep scored his second T20I fifty in 16 matches.

"Feels good to contribute to the team again after coming close to a fifty last time but it was more important to win. We are playing good cricket and really looking forward to making it 5-0," said Virandeep after winning his second man-of-the-match award of series.

"The belief of the players has helped us and whenever we needed a contribution from someone, everyone has stepped. The unity is amazing."

Malaysia made two changes from the third match with Dhivendran Mogan, making his T20I debut, and Anwar getting a taste of action in the series for the first time.

Captain Ahmad Faiz Mohammad Noor chose to bat first after winning the toss for the fourth straight time, trusting his batters and bowlers to do the job.

Given a second chance as Virandeep's opening partner, Ariff Jamaludeen barely improved on Sunday's one run when he played a rash shot to long-on off Mohsin Khan for seven from nine balls.

All-rounder Khizar Hayat Durrani, promoted to No 3, came on to make an immediate impact by smashing boundaries off the first three deliveries he faced from Mohsin.

Khizar and Virandeep put on 50 runs for the second wicket before Aftab Hussain had the former caught at deep square leg for 28, having hit five boundaries from 17 balls.

Virandeep reached 50 off 39 balls with a single but fell the next ball he faced off Aizaz Khan after a 55-run stand with Faiz.

Aizaz also accounted for Syed Aziz Syed Mubarak before Faiz was bowled by Mohsin having struck five boundaries for 43 runs as Malaysia stood at 147-5 after 18 overs.

Another 20 runs came off the last two overs when Sharvin Muniandy hit a six and four for 13 runs off eight balls as Malaysia posted their highest total of the series.

Hong Kong raced to 44 without loss inside five overs before Pavandeep Singh made the breakthrough by having Nizakat Khan (28) caught by Syed Aziz.

Anwar bowled Shahid Wasif for 29 as Hong Kong reached 66-2 before complacent running saw Waqas Khan (16) fall short of the crease as an alert Anwar, aided by a perfect throw from Faiz, shattered the stumps for a run out.

"I saw the batter was taking his own time running back so in my head I already knew what I was going to do and threw it to Anwar at the non-striker's end," said Faiz.

At that point Hong Kong needed 75 runs from 40 balls but they lost another wicket when Khizar produced a fine dive at square-leg to dismiss Waqas Barkat (14) off Sharvin's bowling as the visitors slipped to 114-4 with four overs remaining.

Pavandeep struck another blow to Hong Kong's hopes as he had Scott McKechnie stumped for 25 before Dhivendran claimed his first T20I wicket by ousting Aizaz.

Khizar was hit for three boundaries in the penultimate over but picked up the wicket of Hamed Khan as Sharvin saw the final over to its conclusion.

The fifth and final match of the series is at Kinrara on Wednesday (Feb 26) at 10am.

You can also enter comments by CricClubs Login