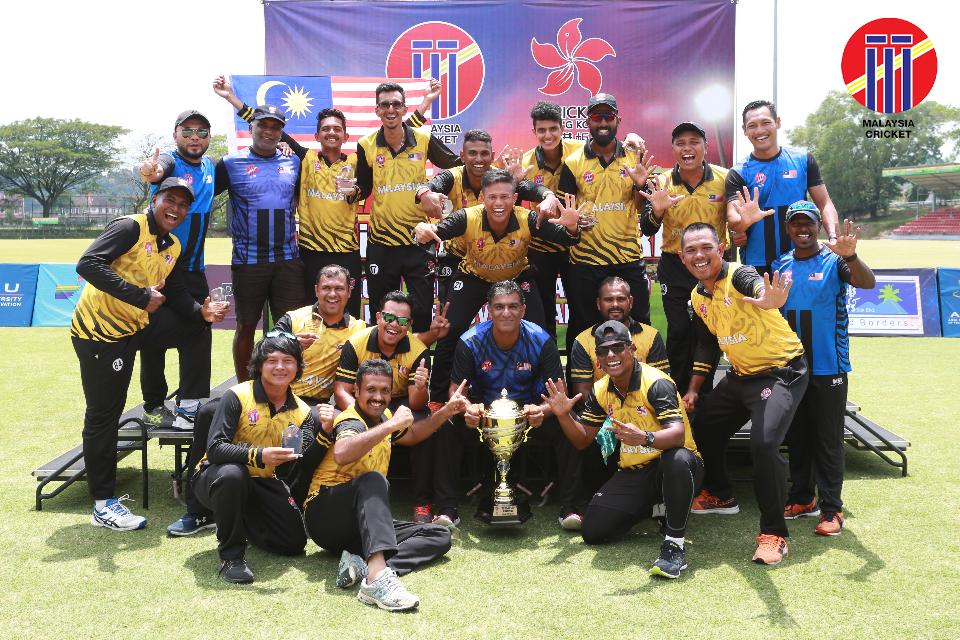 Malaysia produced a magnificent batting performance to beat Hong Kong by six wickets in the fifth and final Twenty20 International at Kinrara Oval on Wednesday and sweep the series 5-0.

The hosts reeled in Hong Kong's total of 171-7 by posting the highest score of the series of 176-4 with nine balls to spare to cap a momentous week as Syed Aziz Syed Mubarak led the way with a brisk 50.

Sharvin Muniandy, Khizar Hayat Durrani and Syazrul Ezat Idrus each took two wickets as Kinchit Shah posted the highest score of the series with his 72 for Hong Kong and take match honours.

The victory over World No 20 Hong Kong marked an historic first T20I series success for 39th-ranked Malaysia after previous losses to Nepal (0-2) and Vanuatu (2-3) last year.

It was the perfect tune-up for the ACC Eastern Region T20 Asia Cup qualifying tournament in Bangkok which begins on Saturday with Malaysia up against Nepal, Hong Kong, Singapore and Thailand.

Virandeep Singh, the match-day captain in Ahmad Faiz Mohammad Noor's absence, delighted in completing the 5-0 sweep as he had targeted from the start.

"It feels amazing to contribute as a captain today and the team played really well and we got the five-nil. The way we have been playing throughout the series, especially today when we had to chase after batting first all the while, we could chase that if we had a good start," said Virandeep, who was also named the player of the series.

"Everyone contributed and they played their roles very well. As a team, it was a superb effort. We go to Thailand now with confidence and aim to win the games there as well."

With Faiz rested for the first time in the series, the selectors brought in Anwar Arudin to shore up the side while bowlers Syazrul and Fitri Sham also returned.

Hong Kong won the toss for the first time and opened the batting as they added 39 runs before Nizakat Khan (12) was dismissed by Khizar, who then ousted Shahid Wasif for 30 in his next spell.

Wicketkeeper Virandeep was quick to uproot the stumps to run out Waqas Khan, attempting an ambitious second run which reduced Hong Kong to 56-3.

Kinchit and Aizaz Khan then partnered for 98 runs before Syazrul dismissed both in the penultimate over. Kinchit, who survived two dropped catches, was out for 72 off 46 for his first half-century in 11 T20I matches having hit nine fours and a six while Aizaz stroked four boundaries for 44 runs.

Sharvin also bagged a pair of wickets in the final over as Hong Kong set Malaysia a stiff target to chase.

Virandeep and Anwar, Malaysia's third opening act in this series, combined for 49 runs before Aizaz captured the wicket of the former for 27 runs after hitting a six and three fours while Anwar followed the next over when bowled by Ehsan Khan for 24 runs having hit four boundaries.

Brisk hitting by Khizar and Syed Aziz kept the run-rate above eight with a 53-run stand before Aizaz had Khizar caught at mid-off for 25, including two sixes.

Syed Aziz reached his fifth T20I half-century off 39 balls but was out to Mohsin Khan next ball at deep point after hitting five fours and a six.

Sharvin and Ariff Jamaludeen then brought Malaysia home with a 35-run stand as the pair scored 22 runs off the 18th over alone with Sharvin going six-four-six off Aftab Hussain. Ariff then sealed victory in style with a six to long-on.

Faiz was pleased with the effort during the week as the Malaysian team proved no score was too daunting for them to chase.

"We hope to carry this form to Bangkok and what is pleasing is that the best batsman and best bowler both came from our team. We saw in this series that everyone can hit from the top to the end.

"I am happy with the effort from all the players, coaches and managemet. To win 5-0 is a great deal for us and it will be a motivating factor for us going forward.

"Credit to our head coach Bilal Asad for helping us to improve and adapt to any situation. Hong Kong set us a tough target to chase but we showed that we can do it and do it quite comfortably."